To paraphrase my girl, T-Swift, it’s been a long eighteen months, friends. Since last we spoke, I’ve added another ninety or so books to my “read” shelf on Goodreads and added probably that same number to my never-ending TBR list. And that’s how you never run out of things to read.

My library and I both managed to survive Hurricane Harvey unscathed, though it was a little dicey there for a few days…I’m only slightly embarrassed by the fact I shed actual tears when I thought they might not make it. Thank God for elevated shelving and AC units which somehow continued to function while mostly submerged! #humidityisnotabooksbestfriend

My babies are safely packed away in storage while we renovate, and, in what can only be deemed a superhuman act of self-discipline, I have managed to only purchase/acquire about ten physical books in the last five months since the storm. As I find myself currently shelfless, I am attempting to practice restraint, and so have done the bulk of my reading lately either on my Kindle or via Audible.

Since it’s January (AKA the month of fresh starts), I figured I’d pick this little blog back up with what I’ve read so far in the new year. I’m not doing any sort of book challenge this go around so be prepared for my picks to be even more random than usual.

Sidebar: If you’re looking for one, the Pop Sugar challenge is always good, though I have no idea what “nordic noir” is supposed to mean.

A book with alliteration in the title: The Woman in the Window by A. J. Finn 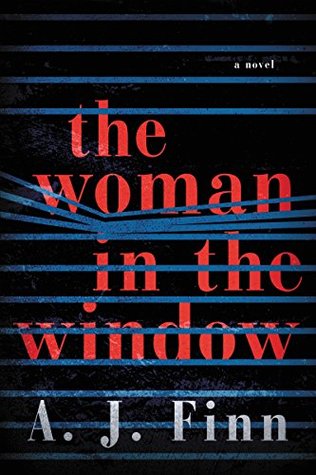 Why I picked it: I think this was actually the third book I picked up this year, even though it was the first one I finished. The other two were memoirs, but that particular weekend, I was in the mood for something a bit more pulpy. Enter the latest book in the “Girl Thriller” category.

See: The Girl on the Train, The Woman in Cabin 10, The Girl Before, Gone Girl, and The Good Girl, all of which I have read over the last three years because if there’s one thing I love, it’s a theme.

Blurb in brief: “It isn’t paranoia if it’s really happening . . .

Anna Fox lives alone, a recluse in her New York City home, unable to venture outside. She spends her day drinking wine (maybe too much), watching old movies, recalling happier times . . . and spying on her neighbors.

Then the Russells move into the house across the way: a father, mother, their teenaged son. The perfect family. But when Anna, gazing out her window one night, sees something she shouldn’t, her world begins to crumble?and its shocking secrets are laid bare.

What is real? What is imagined? Who is in danger? Who is in control? In this diabolically gripping thriller, no one—and nothing—is what it seems.”

“Watching is like nature photography: You don’t interfere with the wildlife.”

What I thought: My Goodreads reviews (if I’ve bothered to write anything at all) have left much to be desired of late. My only note on this one was “A better Girl on the Train than the original,” and I stand by that assessment. While both have unreliable narrators, I actually cared about and liked Anna, while I found Rachel, the main character in Girl on the Train, utterly insufferable.

This book is basically Rear Window set in the suburbs, but with some surprising twists and interesting variations on the Hitchcockian-style thriller. Anna herself is a huge fan of the genre, and it’s easy as a reader to question how much of what’s happening is real and how much of it is a drunken fantasy borne of two bottles of merlot and one too many viewings of Rope.

Anna’s house is essentially her whole world, and I loved that it becomes a character in the story itself. Beautiful but neglected and almost a kind of mausoleum to Anna’s past, it makes for a great setting for Finn’s tale. It felt very Manderley-esque to me.

Sidebar: If you haven’t read Rebecca, do.

The book is pretty tightly plotted overall, though there are a few plot points that seemed a bit odd; however, in hindsight, they were probably meant as red herrings.

The Woman in the Window is a worthy addition to the “Girl Thriller” genre (and I’d say one of the best ones).

**Addendum: I might kind of do the Pop Sugar Challenge, so I’ve added the category into which I shoehorned this book to the title**